Why the Home & Garden Network Will Never Stop Here 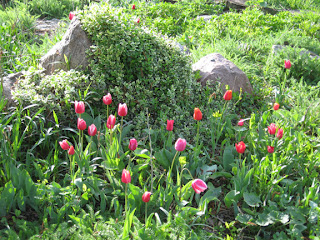 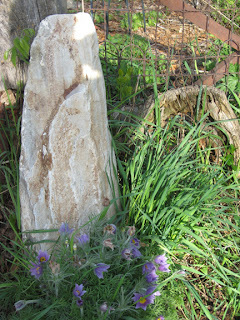 It's the last week of the semester, and I'm suffering my usual angst and guilt over being stuck in the house with a stack of papers to grade while the yard and gardens run amok, threatening to grow, vine, spread and cover beyond my control. We're eating the first asparagus, the gooseberries are loaded with tiny sour fruit, the apple and apricot trees are in full bloom, and Ray has begun the weekly pied-piper mowing, trailed by a flock of 16 peacocks in full mating dance. But the snow shovels are still leaning against the house in our bewilderment over this sudden spring. 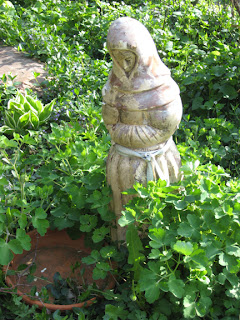 Out here in the country, we have only the brief illusion of domestication - turn your back, and you'll have yarrow-ringed tulips and creeping Jenny climbing your pant legs. We've long since given up the fantasy of a manicured showplace acreage. Now we only try to stave off a complete takeover. Here's an old poem that sums up my more realistic gardening philosophy...
GARDEN HYMN
This is no English tea garden, pal.
No fragile limp fuscia
edged in periwinkle ruffles,
no meandering crocus border,
wisteria draped over a pale trellis,
no painted wrought-iron bench
resting in the thick, damp shade.
No thin ivy dipping its compact buds
in a moss-blue wading pool,
dotted with alabaster cherubs and
creamy-white water lilies. 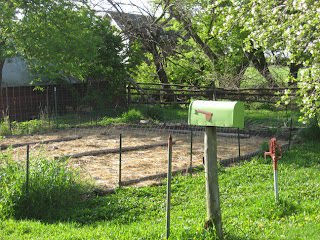 No sir, this is serious prairie stock.
Drought-resistant bush beans,
sixty quarts worth,
squared off in rotten railroad ties.
Screaming red Big Girl tomatoes
strung to chicken wire
with old support hose.
Hot jalapeño peppers splitting
in a sudden mud-splattering downpour—
a brief storm that somewhere washes out
a delicate, orderly flower bed.
Posted by mars at 7:41 AM No comments: 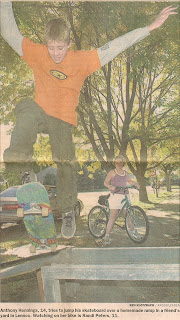 One of my son’s friends was killed recently, Anthony Hennings. He was 24. Maybe because I’m a midlife woman, I can say with some authority, he was a baby. A baby.

The local paper and TV news, of course, have sensationalized his death by focusing not on the tragedy of a young man’s sudden exit from this world, but on the “alcohol-fueled argument” that led to his shooting (not clear if it was accidental or intentional yet). Maybe because I’m a product of the 70’s, I can say with some authority, we’ve ALL made bad choices in adolescence and young adulthood. If you haven’t, you’re lying.

I have no doubt that Anthony made some bad choices in his comet-brief life. And one of those bad choices got him killed. I want to take some responsibility for that, too. I’m part of a culture that teaches kids practically from birth—at least from the age when they can watch TV and hold a videogame controller—that violence is the ONLY conflict resolution. And with those same videogames, we’ve trained kids to be GOOD at that violence. And with TV, movies and games, we tell them over and over, that violence is cool, colorful, it’s okay, it’s a bazillion-dollar industry. Death is just so much bright red splatter on the screen, then you play again.

But in the sensationalistic “thrill seeking” that Anthony’s tragic end is generating in the press, the story of his life, the human-ness and humane-ness of a sweet, sometimes lost, kid is missing. I’ve known Anthony since he and my son were in sixth grade, and here’s what I will focus on as I remember him and honor his life… 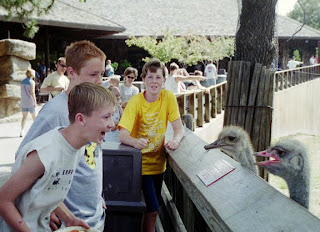 When my son decided to be baptized at First English Lutheran Church in Lennox, Anthony, already baptized and confirmed in the church, sponsored him.

Along with several other Lennox skateboarders, Anthony helped in the fundraising and publicity that led us to getting a Tony Hawk Foundation grant, Lion’s Club help, and enough extra cash to build the skatepark in Lennox.

Anthony, my son and a few others built a skate ramp and rail on our sidewalk in Lennox. One day, the Argus Leader came to do a story on our park-building efforts. My son attempted a trick, fell, and broke his arm. Immediately, Anthony jumped up and ollied for the Argus photographer, who had the good sense to run Anthony’s picture and report on the park fundraising, not on my son’s mishap.

Anthony grew up in a home with his mom and younger sister, no dad around. The kids sort of raised each other while their mom worked to keep up their home in Lennox. Their mom died of breast cancer when Anthony was 22. If you think a kid’s done needing parents at 22, think again. 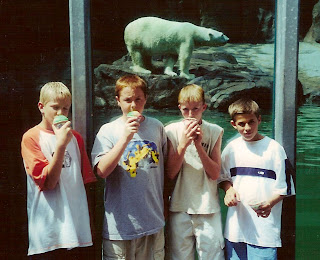 When we took the boys to Omaha for a weekend of skating and to go to the Henry Doorly Zoo, that bony, leggy little Anthony annoyed the zoo ostriches by doing a dead-on, nose-to-beak impression of them. He annoyed zookeepers by trying to feed the ostriches his snow-cone. I tried to be annoyed, too, but I couldn’t keep from cracking up.

Five days ago he was skating with my son. He had a little tear in his jeans. By the time they were done skating, they were both laughing at the completely shredded leg of those jeans. I like that…they were laughing at something silly, like the kids they are. The kid Anthony was.

I’m wishing for Anthony another go-round, one that’s peaceful, one with two healthy, happy parents who enfold him in love and protection and direction that doesn’t end at 7 or at 22, one where alcohol and violence aren’t the remedies for pain and loneliness, one where he can laugh, fall in love and be loved in return. One where he can grow up.
Posted by mars at 7:56 AM 12 comments: