MOTHER by any other name... 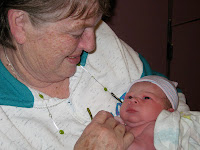 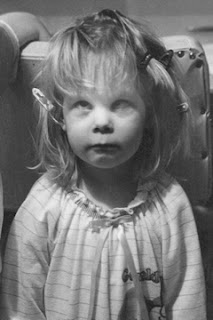 My stepson was the first of our four offspring to call and wish me Happy Mother's Day today. That doesn't mean the other kids are naughty, only that the designation "stepson" is misleading - though I'm not his biological mother and neither of us pretend I am, I have worried about him, loved him, gotten in his face, had his back, teased him, and nagged him since he was nine years old, every bit as tenaciously (and as annoyingly) as I did with the other kids. In my book, "mother" is any person (male or female) who will do this stuff for you, whether related by blood, by marriage, or by sheer will. My mom taught me that. So here are a couple of poems for mothers, sons & daughters. Happy Mother's Day.

This panel is the Madonna,
whose hands have pared and cut
bitter onion, turnip, carrot,
whatever meat could be found,
have sealed it with salt, water and fire,
have buried day-old kittens,
necks snapped by a restless tomcat,
have peeled back the burnt skin
on a child’s open palm,
handprints brittle and delicate
as silvery flakes of mica,
have scrubbed stains from
a girl’s rose-patterned bedsheets,
have traced invisible, holy signs
on the skin of a man’s back,
have followed the curve
of his muscled hip,
have folded around him in prayer

This panel is the Magdelene,
who once lifted her foot to step over
a fallen tree branch and stopped
mid-air, caught in a rippled vision
of a tree from which the branch
might have fallen, then the constant
inescapable drip drip dripping
cascade of incessant thought—
a scored, moss-covered trunk,
thick wandering branches,
spreading fan of twigs,
intricate lacework of new growth
suspended in air, tree and not tree, 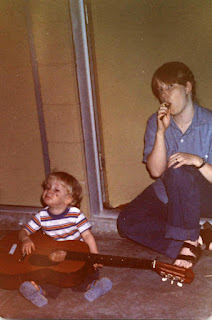 or  what space there is between,
or the nature of Tree,
her Self at the root—
She, Tree, Air, God
and Water, always Water

My sons, three wild choirboys,
have visions too, have wandered
in the fog. They are brilliant,
these boys who catch and sing the sun,
griefless, hysterical, or strangely quiet.
Their high notes burst like sparks
against a dark South Dakota sky.
Their low notes disturb the river’s
calm surface. Teach them to settle
disputes as you did, with relics—
thumbs or long leg bones planted
in a tenuous line of truce, flagline
between their constant thieving
companions, Need and Want.
Bully them always toward
goodness & mercy,
knock them down in the
schoolyard if you have to.

Semester, you're not the boss of me. 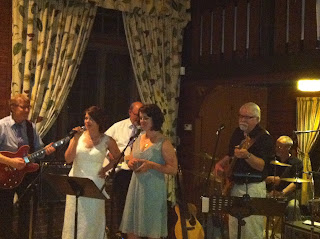 Each year, when Semester finally uncurls his white-knuckled fist and lets me loose for the summer, the process of reclaiming and healing my Self begins. This year, the process began with a road trip to Wisconsin the day after I taught my last classes. 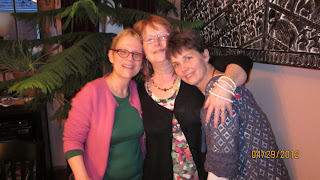 Ray and I loaded up the Bug and headed to Milwaukee, for the wedding & reception of the last unmarried daughter of one of Little Henry’s gee-tar players. Little Henry is a band Ray played in back in his 20’s, and they’ve reunited for occasional gigs over the past decade or so. The wedding was beautiful, with a gorgeous grinning bride, a handsome groom, and a sister trying to sing through her own happy weeping. The reception was a joyous celebration in a beautiful rustic lodge, with Little Henry dishing out tunes that kept the dance floor packed. And how many brides or grooms can say their dad’s band played for their wedding dance? The bride and one of her sisters even treated us to a couple of songs with the band. And I got to belt out a few tunes, too, soaking up the amazing healing vibrations of music.

Our next stop was Madison. We had an all-too-brief overnight visit with my two dear friends, Emma & Ruby. The three of us had been nearly inseparable back in the day when they lived in our Little Town, and even after they both moved to Madison, we continued our decades-long business, Sacred Body Jewelry, designing and selling sterling silver anatomical jewelry. We recently folded up the Sacred Body shop for good when we finally admitted that three hippie women combined do not one business mind make. So it was blissful, even for such a short time, to reunite and to remember that our friendship, not the business, is our real connection. It was a 24-hour whirlwind of garden tours, knitting shop & food co-op runs, an incredible lasagna dinner, philosophy and laughter over too many glasses of wine, getting acquainted with Ruby’s partner and re-acquainted with Emma’s partner & beautiful son, and slow morning coffee. And it all points out, again, that my life is infinitely richer, deeper, and more meaningful than simply what I do for a living. 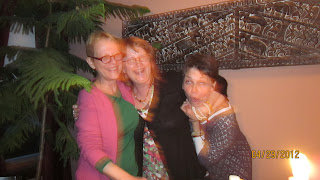 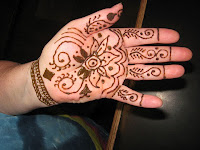 We’re back home now, and I’m so grateful that the Universe, in her wisdom, occasionally kicks my arse and shows me how blessed I am. Yes, I have a huge pile of grading to wade through, panicky student emails to answer, and bureaucratic loose ends to tie up, but my mind (and heart) are slowly unclenching and turning toward the things that define who I really am: music, writing, gardening, reading for pleasure, peacock herding, unhurried gatherings of family & friends, and attention to health, wellness, and beauty. I have a new Shiraz/Zinfandel red wine to start fermenting, a batch of kombucha (fermented tea) to start, daisies to plant, and I’m mixing up patchouli-scented henna today. I’ve got my Birkies and a tie-dyed t-shirt on, and dangit, middle-age or no, I may even braid my hair.

You tried hard to squish me, Semester, to grind me into Bitter Schoolmarm Mash. But thanks to the Universe and her sweet reminders of what really matters, I’m still here, and summer is a wide-open door.
Posted by mars at 9:54 AM No comments: