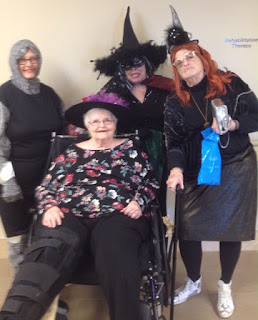 It’s Halloween. And something really scary happened this morning—I realized as NPR woke us up, that whenever I hear someone say “the president,” I knot up in a hard lump of seething anger. And if I hear Voldemort’s voice, my anxiety level jumps to “steaming fissure.” It occurred to me, again, that I need to focus on what's GOOD in the world.

In order to surround myself with a more positive vibe, I’ve given up all news except PBS News Hour (and I only watch that every couple of weeks). For the rest of my news, I watch Colbert, Oliver, and Bee. Still, putting a funny spin on the news isn’t enough to soothe my anxiety. So, in addition to my gratitude journal, meditation, extra Vitamin B and chamomile tea, lavender baths, Theta-wave music CD’s, and extended periods of total silence, I’ve compiled a list of things to remind me (us) that in spite of a relatively small number of GRUBS (Greedy Repulsive Unrepentant Bastards), we humans are pretty okay… 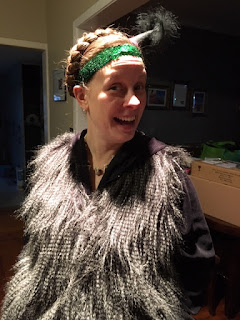 1. All but the most radical people of faith—of all major religions—are beautifully kind, peaceful, and generous people. For example, after the shooting by a white terrorist at a Pittsburgh synagogue, Muslim organizations instantly raised over $200,000 to help victims and their families. https://www.nytimes.com/2018/10/29/us/muslims-raise-money-pittsburgh-synagogue.html

2. I finished grading a stack of papers, and the next batch won’t come in for THREE. WHOLE. DAYS.

3. The Great Barrier Reef has been dying. Scientists have now successfully bred GBR coral in the lab and transplanted it back in the wild.

4. Young people are expected to turn out in record numbers for the November 6 midterm elections.

5. The hole in the ozone layer above Antarctica is recovering, according to NASA: https://agupubs.onlinelibrary.wiley.com/doi/abs/10.1002/2017GL074830

6. My 82-year-old mother fell twice last week. Hard. On a hardwood floor. She didn’t break a bone, and her spectacular shiner only adds to her Halloween witchery.

7. Honeybee populations are on the rise. 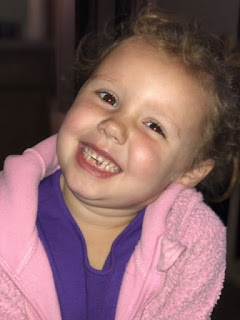 8. Our kids, their partners, and our grandkids are compassionate, funny, smart, dear human beings all.

9. This barber gives homeless folks haircuts for a hug: https://www.cbsnews.com/news/homeless-pay-for-haircuts-with-hugs-in-conn-town/.

12. Our bathroom remodel, to make our main floor more mom-friendly, is finally done. And it turned out sweet as can be. 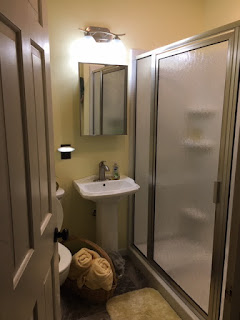 13. Babies were born to two of my online students (in the same class) in the last month. Both students kept right on with their school work and let me post pics of the babies on our course website.

14. Coffee prices have been decreasing (so stock up the freezer—they’re expected to go up up up starting in 2019).

15. Trick-or-Treaters. C’MON! Could these kids BE any more adorable and full of promise?!?

16. A record 256 women are running for the House and Senate in November. SO PLEASE VOTE. 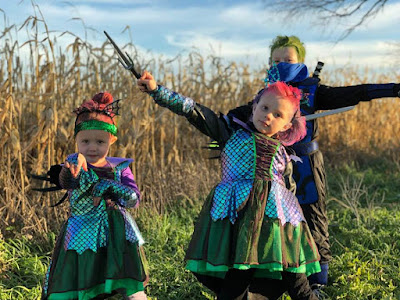 Prairie folk often attribute their craftiness to pragmatism: we make things because we need them. But trust me, NO ONE I KNOW NEEDS ANOTHER KNIT HAT. EVER. Admit it…you’ve got a Rubbermaid tub in your hall closet overflowing with hats, mittens, and scarves. Your drawer is stuffed with untouched handknit socks you’ll re-gift as soon as the knitter has forgotten she/he gave them to you. So no, it isn’t about need. It’s something more…

1. “Idle Hands” Knitting. My grandma, a fairly stoic Presbyterian, reminded me often that “idle hands are the devil’s workshop.” When she sat to watch TV, she was also knitting an afghan, mending (including socks…people used to mend and keep wearing holey socks!!), folding laundry, or writing letters. I’m not religious myself and don’t believe in devils, but I have to admit that when my hands aren’t busy, I’m twitchy, and I watch around corners.

2. Knitting as Mindfulness Practice. Though I’ve been practicing for years, I admit to having a hard time with meditation (https://www.youtube.com/watch?v=o-kMJBWk9E0). I’ve heard the mind compared to a willful horse that’s always distracted by sounds & sights, and that constantly wants to turn back to the barn. So for me, mindful knitting helps me rein in the horse, instead of letting the horse take me astray. It’s a chance to PAY ATTENTION to each stitch, to the feel of the yarn, to the sound of the needles, to the rhythm of the rows. It’s a chance to stay in the present moment. I’m pretty much Type A+++, so knitting helps me slow my breathing & heart, lower my BP, and let go of the day/plans/regrets/schedule/lists for a time. 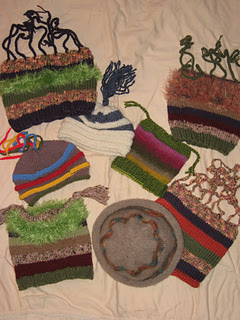 3. Cheap Gift Knitting. I’m a perpetually poor teacher. Ray is a printer (he runs a Heidelberg press). We live in South Dakota, where K-12 teachers are the lowest paid in the nation. IN THE NATION. And where post-secondary teachers don’t do much better and sometimes do much worse. And where wages in general are woeful. So yes, kids & siblings, you’re getting another funky knit hat and more fingerless gloves for Christmas.

4. Social Anxiety Knitting. You might not know this about me, but I’m an introvert. I do well in small groups of intimate friends, but put me in a large group, or any group of folks I don’t know, and the outer me will be charming and all smiles. But inner me might be bug-eyed, quaking, and hanging by her fingernails from a wall sconce. I’ve discovered that taking knitting everywhere I go can help in several ways: (a) some people will stay away because they think I’m “busy”; (2) some people will approach and ask about the knitting, which breaks the ice; and (III) I can effectively “time out” when I need to by concentrating on the knitting for a bit.

5. “Ignorance is Bliss” Knitting. I have a LOT of responsibilities and stress. A lot. A shit-ton, as the kids say. Knitting can sometimes signal others to steer clear because, dangit, I’m “busy” doing something constructive and important. And trust me, EVERYONE I KNOW NEEDS ANOTHER KNIT HAT. RIGHT NOW. 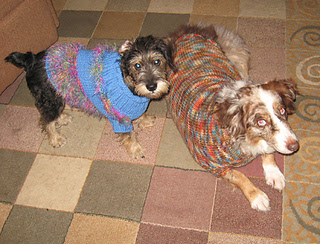 
In October, I’ll celebrate my 6th re-birthday. It will be 6 years since an ischemic right pontine stroke blasted me in my sleep, a stroke I’ve affectionately nicknamed BS (Bastard Stroke). I won’t go into the gory details here, but if you want them, they’re here: https://uncanneryrow.blogspot.com/2012/10/stroke-of-some-sort-of-luck.html

Anyhoo, this is about a recent milestone. I am SO AMAZINGLY LUCKY for many reasons, but one of them is that I’m surrounded by a community of world-class musicians and music lovers. And once every week or two, I get to sit in with the band and sing. One of my most memorable moments singing was at the wedding of a friend’s daughter. I got to sing “At Last” with a stellar band. It was one of those moments for me when all the stars align—band is hot, voice is in fine form, you’re feeling it down to your bones, not just singing it—and I almost cried, it all felt so good. Then along came BS. 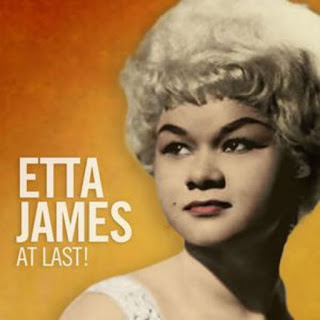 On the day before BS, I was sitting at a singing & healing workshop offered by a friend and former Little Town’er, and one of the things she said was that it doesn’t matter if you sing offkey, if your voice is shaky, if you think you can’t sing, etc. What matters is just to open up and sing. I had already had three or four TIA’s (mini strokes) in the previous two days (which I wrote off to stress and grading fatigue), so I was crabby and just feeling off. Right, I thought, whatEVER. It would take me six stubborn years to understand how right she was.

Among the “deficits” (seriously, that’s what the med/pharma complex calls the aftershocks of stroke) I was left with after BS, was a mucked-up throat: right stroke means left vocal cord can be “sluggish,” post-stroke BP drugs and CPAP mean that my throat is perpetually dry, which can cause some swelling, which means my tone can be pinched, and, worst of all, I don’t have the vocal control I had pre-BS; my voice can sometimes be…well…wobbly and willfully independent.

It took me about two years of checking things out with a vocal rehab ENT, rehab exercises put together for me by my friend C, a vocal teacher, and practicepracticepainfulpractice before I felt comfortable singing in public again. Even then, I stuck to “safe” songs—limited range, no challenging vocal frills, so familiar I could sing them in my sleep.

Then this week, I screwed up my courage and ASKED the band if I could sing “At Last.” I hadn’t tried it since BS, except by myself, shut in my home office, when no one was home. And I did it. It wasn’t great, I missed a few notes here and there, it didn’t come out quite as good as it had when I practiced it, but DAMN, it felt FINE! I can’t quite put this in words, but for me, singing that song was some sort of threshold I’d been terrified to cross.

And that’s the real milestone…not that I sang the song, but that I remembered what a loving, forgiving, accepting, supportive community I get to live in, and that I don’t need to be afraid. I just need to open up and sing. 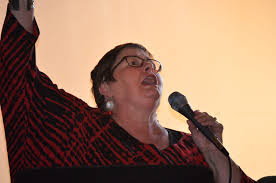