I grew up in north Omaha in the 1950-1970’s, in an area called Florence. We (three and sometimes four generations of us) lived in a 17-room house known as the Tucker Hotel on Tucker Street. Before it was swallowed up by the Blob (Omaha), Florence was a town, and my great-great-grandfather Freeman Tucker, whose family ran the hotel, was mayor; hence, the street name. Thinking about Florence lately scares up some ghostly images from my youth. Like the time Maureen and I, twelve years old, took the #6 bus downtown to Woolworth’s and bought “Flower Power” PEZ (a beatnik dispenser with candy that tasted like nasty perfume). Here are a few more spooks… 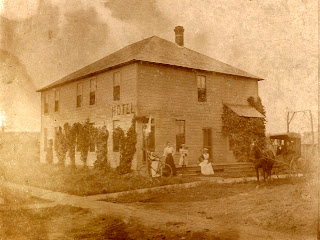 The doll hospital. I can’t remember exactly where this was, maybe around Miller Park. Mom took me there with my talking Chatty Cathy doll, which had crashed to the floor from Mom’s bed (I most certainly was NOT jumping on the bed) and now only made raspy grunting sounds. The doll hospital man checked her in at the front desk, tenderly, like a patient, putting her in a little doll bed. We went back a few days later to pick her up. We FIXED broken stuff then and kept using it….wow. 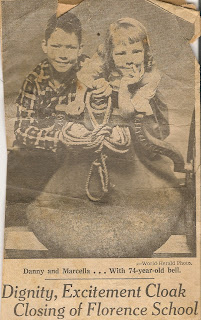 The balloon man. Okay, this is a little creepy looking back. But there was this guy who roamed Florence, maybe in a clown suit (I can’t quite remember), stopping kids on the street to make balloon animals for them. He might have worked for Wonder Bread; this was before mass-marketing/advertising, so companies often had people go out on foot and spread the word about their products. Consider Duncan YoYo’s.
The YoYo man. Duncan YoYo’s advertising consisted of occasional magazine ads and itinerate demonstrators who fanned out across the country. Once in a while, the YoYo man would come to Koebler Drug in Florence (with a real soda fountain). We’d crowd around the guy outside the store, and he’d walk his dog or go over the moon. Then we’d all run inside, buy yoyo’s, whack each other in the shin or ear trying to copy his tricks, give up by nightfall and toss the yoyo’s in the milkbox. 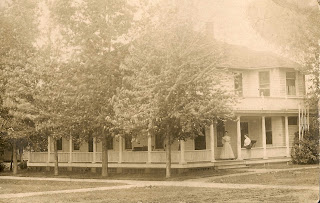 The milkman. We had a milkbox on our front porch. Mom or Grandma would put empty glass milk bottles in it, and the Greystone Dairy milkman would collect the bottles and leave filled ones. For a while, our milkman was our neighbor, Dave Donahue. I asked him to marry me when I was five. I also once put Debbie Lechner’s tennis shoes in our milkbox, sat on it and crossed my arms & legs, and wouldn’t give the shoes back till poor Debbie ran home crying. That’s some baaad milkbox karma… 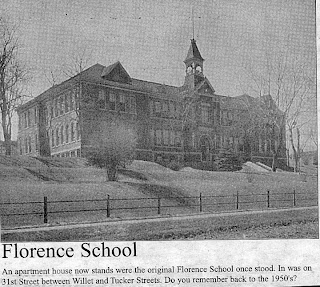 Florence grocery. My grandma worked there. The wood floors were worn smooth & shiny. There was one register in front. In the back was the meat counter, and behind that, through the swinging doors, was the room where they butchered. Man, I can still smell that place—sawdust, bread, sweat, Pine-Sol, fresh air from the open back door, and blood.
Chicken blood. My grandpa hunted & fished (we were a few blocks from the Missouri, near the Mormon Bridge). He raised hunting beagles in a kennel in our back yard. He kept his fishing gear on the back porch, including little tubs of dough bait and dried chicken blood. My grandpa would mix the blood, a dark, almost black powder, into his bait. My grandma would sometimes sprinkle it around the garden to keep rabbits out. I used to trick my friends into opening the tub and smelling that rank dried blood (hmm…I’m sensing a pattern of brattiness…).

Florence School. When I was in first grade, our entire school went on a march from the old Florence School (a block from my house) to the modern new school building, just under a mile away, and a couple blocks from Notre Dame Academy for Girls, where I would end up for my sophomore year.
Zesto. It was a block from my house. Footlong chili dogs were 89 cents. Brown crowns (chocolate dipped cones) were 29 cents. Enough said.
Florence Pioneer Days. Every year, the carnival would roll into town in the middle of the night and take over the ballpark a block from our house. They’d take a day or two to set up, and packs of us kids would hang out, hauling water from the pump for the horses, fetching tools, or running errands for the carnies. Funny… that sweet, sweet memory suddenly sounds like child labor… 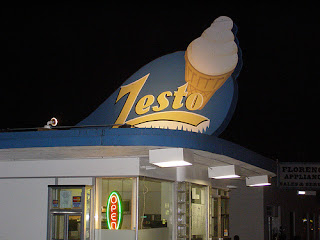 There are many more ghosts, of course. But some of these—like milkmen, YoYo men, soda fountains, doll hospitals—are thinning into vapor. I like that I can still conjure them now & then. And when I do, I swear I feel 29 cents burning a hole through my pocket.
Pictures Top to Bottom: Duncan Yo-Yo Man, Tucker Hotel 1882, Prescher kids on old Florence School Bell after move to new school, Tucker Hotel 1927, old Florence School on 31st & Tucker, Notre Dame Academy for Girls, Zesto)
Posted by mars at 8:28 AM No comments: