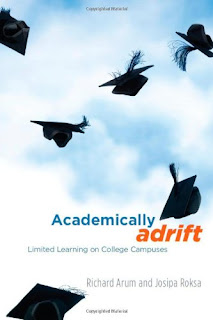 Arum and Roksa’s study suggests that college students aren’t much better at critical thinking by the time they graduate with a four-year degree, than they were as college fresh-persons.

I admit I haven’t read the book. I’ve only read excerpts and second-hand articles about the book, many of which cite the study’s most shocking statistics. The book appears to put most of the blame on academe for having low expectations of students and for not being “rigorous” enough.

As a college instructor of mostly first- and second-year undergrads, I’m wondering if Arum and Roksa factored in the following:

1. The New Business Model – Most public higher ed institutions are under the budget knife. And students in seats = $$$. This means that for many instructors, department chairs, administrators, etc., the pressure’s on to ensure student recruiting and retention. And the unspoken maxim is that a “happy” student (aka a “customer/consumer,” one who isn’t asked to do too much, one for whom instructors bend over backwards and do loads of hand-holding, one whose grades are, perhaps, a wee bit inflated) is more likely to stick around.

2. The Time Crunch – Instructors (and administrators) in this era of budget cutting and “accountability” are increasingly being asked to do more and more with less and less. For example, in addition to my normal fairly heavy teaching load (four classes this semester requiring lesson plans, in-class teaching time, grading), I now manage a student organization (my service requirement), manage three on-line “tools” associated with my classes (tools that need constant updating), manage my e-gradebooks (more updates), document everything I do in an online faculty evaluation “tool” (more updates), and complete a monthly online “time sheet.”  Don’t get me wrong—I love the actual teaching part of my job. But teaching + the additional demands = no ttime to improve my teaching skills, to do the research that would make my classes more interesting/fulfilling (or more rigorous), or to do my own writing/research. And, at most institutions, class caps creep up year after year (more grading, more documenting, more measuring).

3. The Student Contribution – This is the big one for me…where does student accountability and responsibility fit into this picture? Arum and Roksa’s study appears to be based on student surveys and transcripts. If students aren’t finding classes “rigorous,” perhaps it’s because they aren’t taking the rigorous classes. Perhaps they’re not making much of an effort. Perhaps they aren’t going to class. Perhaps they’re texting in class instead of paying attention. Perhaps the rigorous teachers are discouraged by a growing emphasis on student evaluations, which tend to bash rigorous classes as “too complicated” or “too demanding”, while bashing rigorous teachers as “uncaring” or “too hard” (comments I’ve seen on my own student evals). It’s as if students and budget-conscious Boards of Regents share this misconception: that an instructor’s job is to flip the lid on a student’s head and—quickly and measurably—dump in a bunch of knowledge. But learning, and even critical thinking in college, is a collaborative process between students and teachers—both have to participate.

My feeling is that higher ed will continue to decline (and I do agree with Arum and Roksa that we’re in real trouble) as long as we keep shifting away from a belief in intrinsic value of liberal arts learning and ever more toward a business model of job-market preparedness—the student-as-consumer and instructor-as-service-provider model. It's all about SEATS & SATISFACTION surveys. And if the burgeoning number of online “college” degree programs is any indication, I’m pretty sure drive-up window diplomas are next.

Or read about the study here: http://www.insidehighered.com/news/2011/01/18/study_finds_large_numbers_of_college_students_don_t_learn_much#ixzz1dDc6aVja
Posted by mars at 7:31 AM No comments:

In a Bristol state of mind...


I have stacks of papers to grade, so of course, I’m daydreaming about music. In September, Ray’s sister and brother-in-law treated us (and “treated” is putting it mildly) to a trip to Bristol TN for the Bristol Rhythm & Roots Reunion music festival. Check it out: http://www.bristolrhythm.com

I LOVE traveling and couldn’t wait to go, although I’m not a fan of bluegrass or “roots” or “Americana” or whatever you wanna call THAT kind of music, so I was sure I’d be people-watching and ignoring the music. Silly, silly me.
We stayed in Bristol at Flo’s Hideaway (http://www.flo-s-hideaway.com), an amazing Victorian B & B run by a Parisian woman and her East Coast husband, Carl. Our suite was like a doll house museum, and Flo & Carl were the epitome of delightful, welcoming hosts. Breakfast each morning was good strong coffee, yogurt, fruit, and home-baked croissants or crepes. If we got back in at a decent hour, there was wine and conversation on the back veranda. Seriously, people, I wanted to grab the doorframe and make them DRAG me out when it was time to leave.

The festival was three days of music, with 20+ venues lining State Street in Bristol. And yeah, the place was eyeball-deep in fiddles, pedal steel, and twangy gee-tar, but I also heard some of the best, most fun, interesting and innovative music I’d ever seen gathered in one spot. I had to chew on my misguided preconceptions of THAT kind of music and try not to embarrass my family by leaping out of my seat in a fit of wild interpretive South Dakota dance.

The trip also included a wonderful afternoon boat ride (and a bat rescue - the bat had been sleeping under the boat tarp), and a trip to the NASCAR track because, well, it's in Bristol, and you just gotta see it.

The Greencards – I want to BE this woman - http://www.thegreencards.com/news.html
Red Molly - http://www.redmolly.com
Darrell Scott - http://www.darrellscott.com
Shotgun Party - http://www.shotgunfiesta.com
Posted by mars at 12:59 PM No comments: