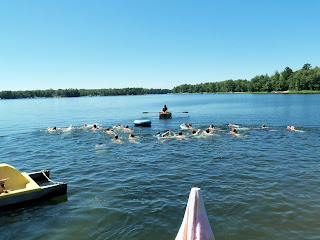 (WARNING: photo of roasting pig may be offensive to some. Also, note the striking family resemblance, especially the eyes...)

I recently got back from My Big Fat Bohunk (Bohemian on my father’s side) Family Reunion. It’s an extraordinary annual gathering of relatives – the progeny of my grandpa Adolph and grandma Viola, and their offspring, and their offspring, and now, their offspring. This year, around 57 humans and 9 dogs (including my mom, dad and three brothers - first time we've all been in one place in umpteen years) reconnected at two cabins on a little wooded lot on a gorgeous little lake in Minnesota.
Our family – teachers, writers, visual artists, real estate brokers, a couple of doctors, a yoga instructor, IT geeks, a printer, a chef, a minister, salespeople, an herbalist/botanist/forager and others – are the hardest-working bunch of folks I know. And for a week or two each summer, we play hard, too. 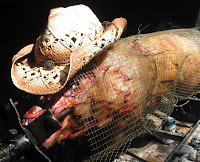 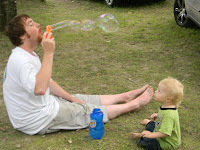 The reunion is a chaotic free-for-all of sun & water fun, excellent food (thanks, Cousins, for taco night, turkey night, cowboy beans, mojitos, and whatever I missed), perpetually-flowing beer, wine and other spirits, boating, fishing, and photo ops. We come from MN, NE, SD, KS, WI, CA, TX and Ecuador, including family members originally from Australia & Chile. Festivities may include a talent show, bellydancing lessons, group yoga, a kids’ quarter toss, a Wednesday trip into town for the Turtle Races, an occasional minor injury, fireworks over the lake, heated religious and/or political debates (the far right, far left, born agains, atheists, and more are represented), late-night cousins' poker games, lake volleyball, and possibly a chat with the sheriff about noise ordinances. We’ve had two weddings on the dock (one couple walked under a cousin-held archway of…yep…peacock feathers). A tent city is established between the two cabins, cabin bedrooms are assigned according to an ancient system of seniority/priority, and some of us wimpier reunitees stay in town at the motel (mere blocks from the coffee shop). This year, Mom, Ray, my daughter & grandson, and our youngest son piled in MiniPearl (my Toyota minivan), and headed north for four days of Big Fat Bohunk fun, resulting in happy, sunny memories that will surely warm us in the prairie winter ahead, such as…
The Esther Williams Invitational Lake Swim – Collective hysteria, sunstroke, or both, caused 20 family members to set off from the dock one morning to swim across the lake and back. Spotters in boats and on jet skis saw to the safety of the swimmers. All 20 made it, including some who, with their bad hearts, arthritis, or general out-of-shapedness, stunned the rest of us, spectating from the safety of our beach chairs. The swimmers’ return to the dock was celebrated with wild cheers & applause, and yes, a beer toast or two. 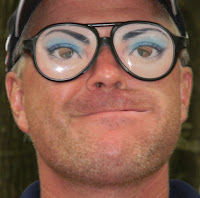 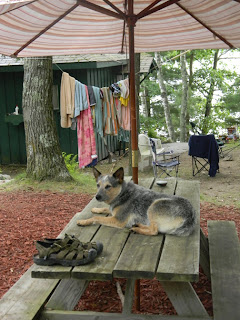 First Annual Go Whole Hog Pig Roast – My oldest brother and a cousin orchestrated this feast. Mr. Squeaky McOinker (later renamed “Dinner” when I said I couldn’t eat something we’d named), spent an entire day turning slowly on a spit. At one point, there were a dozen menfolk gathered around the roaster, grunting and chest-beating. Ironically, one entire branch of the family tree is vegetarian, but with sides of tabouli, scalloped potatoes, corn casserole, coleslaw, cucumber salad, and curried beans, all were happy at the end of the day. My apologies to cousin B for someone’s warped sense of humor with the centerpiece – a red-cabbage-lined platter, Dinner’s roasted head in the center, an Italian tomato in his mouth. I’m not sure who fessed up to that.
Beach Towel Yoga – A dozen or more family members took part in morning yoga classes in the neighbor’s yard. Even some less flexible family members got right in there to stretch & sweat (uh…I was…uh…busy…yeah…at the coffee shop in town). After much wee-hours revelry the night before, a yard full of pasty Bohunks doing Downward Facing Dog at sunrise redefines “hung over.” 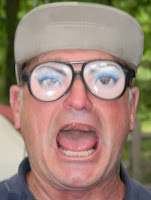 Common Grounds – Did I mention that this little coffee shop was mere blocks from our motel? I stopped in each morning for my essential triple latte. I swear, celestial rays of heavenly sunlight and a choir of angelic voices singing “Halleluiah” emanated from the building each morning, drawing me, trancelike. 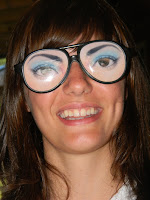 Campfire Hootenanny – While young’uns (and I mean “kids” in their late teens and 20’s) roasted marshmallows, my brother regaled a giant Ring ‘O Bohunks ‘round the campfire with guitar & song. My personal favorite was his emotional rendition of the Randy Newman classic, “Let’s Drop the Big One Now" ("Political Science"). Dang…brought tears to our eyes. 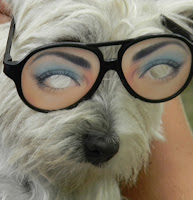 These are just some of the highlights, and as you can see, we’re not a quiet family. We don’t have polite reunions where everyone eats a tiny piece of cake off a clean napkin and talks about rain gauges. We’re big & loud. We’re half-dressed, wet & coated with sand most of the week. Except for cousin A and her wardrobe of fashionista bikinis, we mostly wear the same pair of dirty shorts all week. Our humor is often off-color. Some of us may sing drunken show tunes in the middle of the night. But we love each other very much, and we’re all grateful to be part of this amazing Big Fat Bohunk family. We're already scheming for next year, in fact. My idea? A Close Encounters mashed potato volcano contest - prize money for the biggest, loudest, longest eruption...
Posted by mars at 1:14 PM No comments: