The Crazy Bee in My Bonnet

I have a GIANT, angry bee in bonnet: I need to get to Ireland. Check out my gofundme page: www.gofundme.com/magdalenes

I’m working on a book of poems about Ireland’s Magdalene Laundries, workhouses run by the Catholic Church in Ireland from the mid-1700’s to 1996 (!), and in which girls and young women were incarcerated and used as unpaid labor in an effort to “reform” them. If you’ve never heard of the laundries, you can read more about them on my gofundme page, and more here: http://jfmresearch.com/. 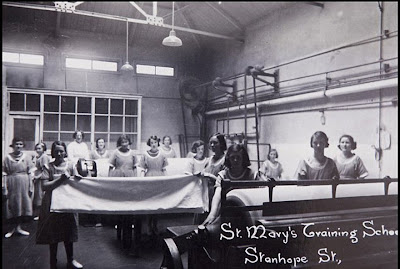 Because I need to go to Ireland to do research and meet laundry survivors, and because I’m a perpetually broke teacher, I’ve started the gofundme page to help me get there. (If you feel like sharing my gofundme link on social media or email, I’d be most sincerely grateful.)

I feel sheepish about asking for help (something I’m not good at) when there is so much need out there, and it’s mostly so much greater than mine. I’m not even sure why this project is so important, so consuming for me at this time in my life, but it sure is.

·      Maybe I WAS a Magdalene (what laundry girls/women are called) in a past life.

·      Maybe it’s because I had two DNA tests done, and they both showed I’m basically Irish with a smattering of Bohunk (Czech). My family had always maintained, in spite of a passel of redheads, that we had no Irish ancestry, so this was a bit of a surprise. Maybe my Irish DNA is calling me back to the land of my peeps, and to speak out.

·      Maybe it’s because I went to Catholic mass religiously (hahaha) as a kid—though I’m not Catholic—and I went to a Catholic girls’ school, and I have a profound love for and fascination with Catholicism’s deep traditions and mythologies, saints, rituals, art, and architecture (although like so many devout and sincere Catholics, I’m horrified by the Church’s abuses past and present).

·      Maybe it’s because I can’t get these babies out of my head… (https://www.theguardian.com/world/2017/mar/03/mass-grave-of-babies-and-children-found-at-tuam-orphanage-in-ireland).

·      Maybe it’s because in my youth, I was the kind of girl/teen who would have ended up in a laundry if I hadn’t been blessed to grow up in America in the 1970’s, when practically every girl I knew would have been likely laundry fodder. There but for the grace…

Ray looks at me like, “Uh-oh…here we go again…” and tries hard not to roll his eyes or sigh too loud. I don’t know if he’ll go with me (he’s one of those rare homebodies who doesn’t care for traveling), but he’s my biggest writing fan and supports me in all writerly things, so I know he’ll be with me either way.

Whatever my deep-seated reason is for needing to write this book, and however long it takes me, I’m going to Ireland. In my own mysterious poet-y way, I’m trusting the Universe to make it happen, and I’ll be sure to blog the trip, whenever it happens. Éirinn go Brách(less)!
Posted by mars at 7:01 AM No comments: