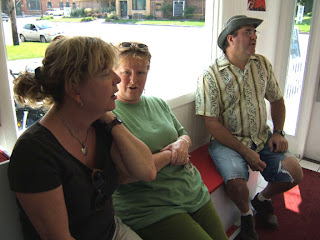 Because of my familial HHN-i (Human Hyper-Nurturer-insoluble) gene (see previous blog post: http://uncanneryrow.blogspot.com/2011/05/rescue-me.html), I grew up believing that if I mustered enough love, good will, and maybe a home-cooked pot roast, I could “fix” anyone. I’ve learned this isn’t the case. As Mu Sen Peng said, “We’re ALL walking around with broken hearts…the trick is to keep walking.” 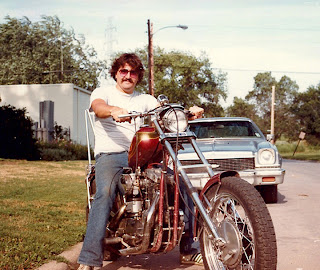 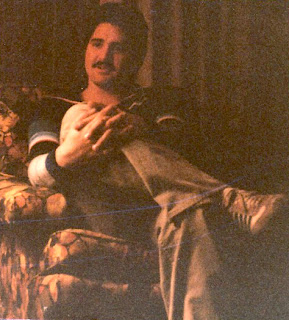 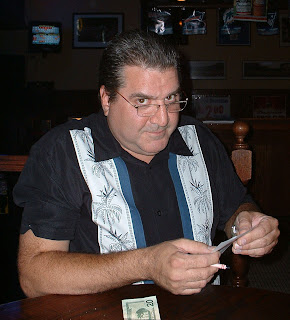 A few people in my life didn’t keep walking. For example, this past week, I inadvertently (thanks to FB) learned of my friend Rex’s death. My old high school BFF’s, Patty and Debbie, have come back from California a couple of times so the three of us could cruise our old Omaha stomping grounds. On each of their trips back, we picked up Rex. Once, we got much of the old gang back together for dinner at the Spaghetti Works in the Old Market, then headed to West O to hear our other friend, George, play some music. Another trip back, we picked up Rex and the four of us hiked the woods of North Omaha, took pictures, and stopped for ice cream. Each time we saw Rex, it was a joy. He was chatty, laughed, showed us all his favorite woodland photo spots, chauffeured us around town, showed off his home studio (he was an amazing bass player), and we reconnected. 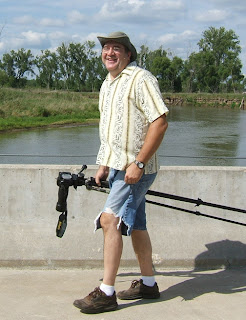 The last time we saw Rex was the summer of 2006. I figured he’d always be there—I guess we all did—and that the next time the BFF’s came back to the Midwest, we’d pick up where we left off. But around Christmas in 2008, Rex killed himself in a church parking lot.

There have been others: Brent (suicide), Ike (suicide), Anthony (shot), Dave (decades-long suicide), and more. Then there’s the long list of family members, an even more intense kind of heartbreak. And until the last decade or so, there was always the nagging guilt, wondering what I could have done—send mittens? remember birthdays? weekly phone calls? drag them home to my guestroom? intervention?—to keep them walking. 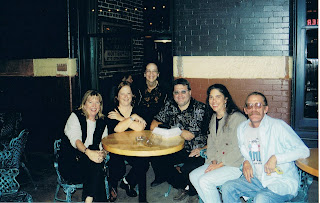 I’m learning, finally, that people make their own choices. If they reach out, I’ll be right here for them, always. But I know now that my bandaging, cajoling, feeding, hugging, knitting, and boo-boo kissing will not keep someone walking who’s decided to stop. And I used to wait for the pain to go away, but I know now that it never does. Each loss means another hairline fracture. I’m learning to live (LIVE!) with my broken heart, and maybe that’s all any of us can do.

for all my friends still walking

Midway along this delicate branch,
this hard walk,
we balance above a dark gulf,

the branch’s end obscured
and each day a new thorn
to creep around.
There are easier ways to go.
We could take a deep breath,
lean into the fall with eyes closed.
Or we could hug the branch, stop,
weighed down under
the broken heart of living.
But let’s you and I choose
to inch along with joy
and gratitude so light
it rains like silver glitter
through the leaves.
(thanks to the old gang for the happy pics of Rex)
Posted by mars at 12:14 PM No comments: 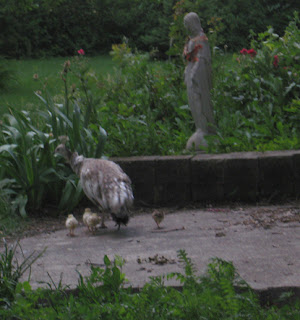 It’s tough, being a peacock in South Dakota. First of all, in your native Indonesia, you'd never have to contend with these brutal winters. Second, in your native forest habitat, you'd have excellent cover from predators. Here on the prairie, when you walk the pasture trails, it's practically a catwalk--the local coyotes, turkey buzzards, and over-eager pheasant hunters might as well be sitting at chipped tables, slurping down gin fizzes, and waving dollar bills.

Life can be pearilous here on the Row. For example, we went into the summer breeding season with 18 adult peafowl. At the high point of the summer, I counted 11 new chicks, for a total of 29 birds. Then, in late September, peas started disappearing—our neighbor says there's a female coyote living down the road, someone mentioned rogue mountain lions in South Dakota, or maybe the turkey buzzards were desperate. Whatever it was, it left two huge piles of pea feathers in the north 40 shelterbelt. So we’re down to 15 adults and 3 chicks. Maybe 18 is the critical mass threshold, the point beyond which the Row can’t sustain the pea-pulation. Maybe you really CAN’T fool Mother Nature.

Our peas know the seasons are changing—it dipped below 40 here overnight. The flock is having a harder time finding tender greens under the crunchy leaf carpet, so they literally huddle on the patio in the mornings, honking & whining, until I go out in my pajamas and toss out a bucket of mixed corn, wild bird seed, and Walmart cat food (while singing “Feed the Birds” from Mary Poppins…go head…just picture that). I try to feed them only every two or three days (my version of being a hardass prairie marm), but that pea-pleading breaks my tender heart. 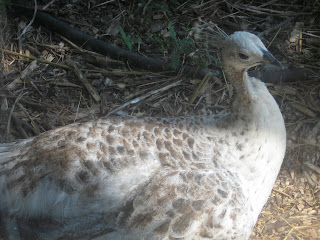 The flock is still sleeping together in the Roosting Tree in our back yard. Ray will soon put a brooder heat lamp up in the rafters of the open-sided loafing shed (peas won’t sleep on the ground or willingly go inside an enclosed building), but the peas won’t roost in the rafters unless (1) night temps fall to around 10 below zero, (2) a blizzard blows through, or (3) wind speeds exceed 35-40. And I’ll soon start my biweekly ritual of hauling gallons of hot water out to the bird baths to thaw the ice. 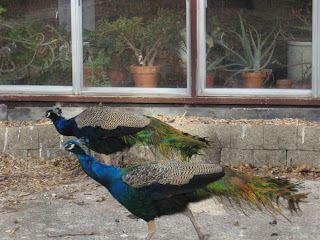 This flock, now thoroughly inbred, has been here on this property for at least a quarter-century, long before we got here. They’ve left Indonesia behind. I worry constantly about them, but they’ve adapted (probably better than we have). They’re Prairie Peacocks. Pavo Crisatus Prairicus. I suspect they run out to the pasture after breakfast and roll on their backs, wings folded around their fat bellies, guffawing hysterically at what a rube I am. So Ray and I will head to town today, to watch the Quad State marching band competition, and to pick up 50-lb bags of corn, wild bird food, and Walmart cat food. Because as my friend CB likes to say, “If we don’t take care of them, they’ll die horrible, miserable deaths, right?”
Posted by mars at 9:36 AM No comments: 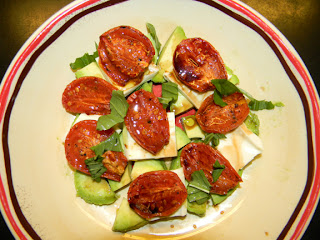 My poor, poor blog has suffered neglect during the Great Transition, that time-warp, summer-to-fall plateau when dying tomato vines are replaced by bushels of ripe papers to grade. I usually slip into full-on denial during the GT, furiously, frantically completing summer projects I was sure I’d have plenty of time to finish. It’s also the time we squeeze in all the last-minute fun we can. Our GT adventures this year included a trip to Tennessee for the Bristol Rhythm & Roots festival (more on that later), Ray’s 60th birthday BBQ/hootenanny (more later), and my trip to Missoula, MT to read poems at the Western Literature Association annual conference with my bonitas compadres, the Girls Spicy (more later). 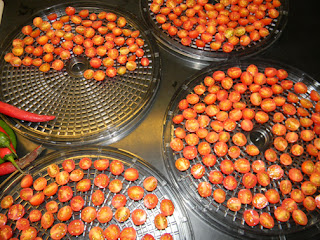 For much of the GT, however, I’ve been focused on food. I continue in my uneasy relationship with food, a love/hate dance that keeps me Rubenesque and a bit too fluffy. I also have a misguided, almost instinctual belief (thanks, Grandma…) that food = nurturing; this summer’s stray pregnant cat fiasco is ample evidence of my obsessive-compulsive need to nurture. 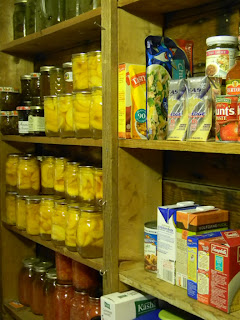 Back to food. This year’s garden provided asparagus, cukes, hot salsa peppers, green & red bell peppers, sweet corn, gooseberries, mint, rosemary, basil, and tomatoes tomatoes tomatoes. So the GT finds me frequently neglecting my school duties to chop, slice, boil, peel, can, dehydrate, roast and puree tomatoes. We canned and froze so many batches of tomatoes that canning & freezing Colorado peaches in September seemed like a vacation. But one can never have too many tomatoes—South Dakotans MUST maintain a full larder—so we also cut gazillions of cherry tomatoes in half, sprinkled them with course salt, pepper, and minced basil, dehydrated them into tiny savory tomaisins, and popped many bags of these in the freezer. (Splendid Salad: Romaine, grilled chicken, crumbled feta, tomaisins and dried blueberries, sprinkled with olive oil & balsamic vinegar.) In Bristol, I discovered the caprese insalata, a simple salad made by layering thick slices of fresh mozzarella cheese, roasted tomato slices, and fresh basil leaves, sprinkled with olive oil and balsamic vinegar. When I got home and made our own caprese salads, I added a layer of avocado. Heaven, I tells ya. 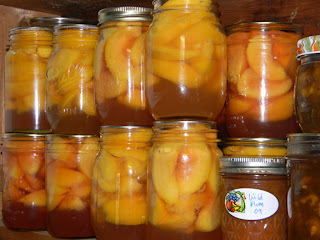 Alas, the GT wanes, however, and it’s time to get serious about schoolwork...just after I bottle my latest batch of Luna Rossa wine. Because any good prairie person knows that once the first snow flies, only a full larder, a stash of Sumatran coffee beans, a Nerf bat and a well-stocked wine cellar can see one safely through winter.
Posted by mars at 10:39 AM No comments: