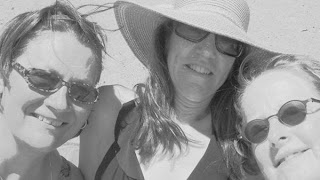 Last week, we had our 10th anniversary quasi-annual Women’s Campout. Only three of us were able to make it this year (there have been as many as 8 or 9), but we had a fabulous time. Over the past ten years, we’ve camped in Yankton, Ponca, NE, and at a cabin high up in the Black Hills. There’s nothing quite like a passel of midlife women out playing with fire & communing with nature.
I packed the essentials: tent, sleeping bag, pillows, floaties, SPF 7000 sunscreen, coffee, wine, chocolate, Kindle, cell phone, chargers, Advil and bug spray. We were roughing it a bit less than usual this year, with the addition of our friend’s camper. Laugh all you want about cushy camping, but keep this in mind: a clean, handy, middle-of-the-night bathroom.
Day 1 - We made camp:  camper (yes, we had a welcome mat, awning and flamingo lights), two tents, and a screen house dining room. We arranged & rearranged the furniture (picnic tables, folding loungers, bag chairs, clothesline, end tables, cooking table) till we had everything just so. Our camp neighbor wandered over to chat, as he would several times more over the next three days – “Do you want this leftover ice?” “Is that cowboy coffee you’re making?” “I sure enjoyed that singing last night.” I think he was trying to figure out why three women were camping alone; each visit, he’d eyeball our camp, as if looking for tell-tale man signs... 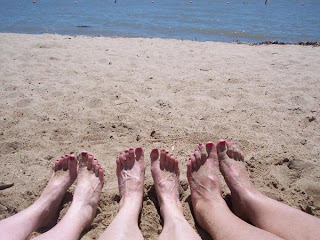 Then (Future Funny Story #1), we sat down for a rest and realized we’d locked the camper keys inside the camper. We’d been celebrating our completed compound with a bottle of wine, so we spent a few moments laughing hysterically before we called a locksmith. While we were waiting, I remembered a bazillion old keys I’d been collecting (for the mobile I WILL make someday when I learn to weld) in my van, Mini Pearl. I grabbed the keys, tried every one, and lo & behold, an old pickup topper key opened the camper! We called the locksmith back, piled into Mini, and took off for a look at the dam.
The Army Corps of Engineers has been releasing record amounts of water along the dam system on the Missouri River, supposedly to minimize flooding caused by two unusually wet springs and Montana snow melt. I’m not sure how well the plan is working, though, as many homes, farms, businesses, a power plant or two, and some entire towns are surrounded by, in, or under water. King Water seems dead-set on taking back the Missouri River Basin.

After staring in awe at the river whitecaps and dam waterfalls, and getting soaked to the skin by the spray, we headed back to camp…just as the rain started. We played Boggle under the awning, and then in the camper, till bedtime. (Note: You’ll notice midlife women scanning the sky for the first hint of darkness, when it’s perfectly okay to go straight to bed. They will sometimes go to bed before dark, too, but only if no one else will find out.)
I hustled to my tent in the rain (coming down at a fair clip by then), where I’d already stowed my gear. As I crawled inside (FFS #2), the entire tent buckled & collapsed, sandwiching me inside. It was quite dark by then, so I groped around for my stuff and made a dash for the camper, where I slept comfortably on a bench bunk only millimeters wider than my child-birthin’, midlife-spreadin’ hips. 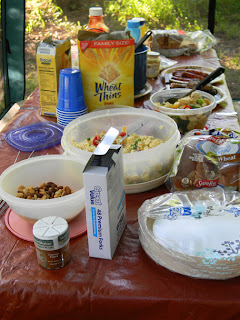 Day 2 – We made our morning fire and had camp-stove coffee in our jammies…for a very long time. Eventually, we made our way to the beach. The water was too rough and full of upriver tree shrapnel to swim, so we sunbathed until my lobster-pink skin was sufficiently dotted with new freckles and just short of blistering.

In the afternoon, four friends joined us at camp. We all went over to look at the dam, then one friend went birding whilst the rest of us prepared a campout BBQ. For dessert, we made s’mores (one friend made gourmet s’mores – s’mourmets, if you will – with giant marshmallows, Nutella, and Ghirardelli chocolate). After dinner, we had a campfire hootenanny complete with 3 guitars, a tambourine, and a choir of women's voices, that continued well past dark. We had a grand time, our company headed back to town, my friend with the Amazon height and long arms fixed my tent, and we hit the hay.
Day 3 – Leisurely coffee in our jammies, then we packed up and broke camp in stages punctuated by more coffee & lounge chair reading. By early afternoon, we were headed back to civilization. 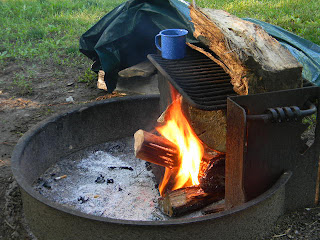 I spent most of this week thoroughly exhausted. I’m now on the hunt for a teardrop camper or a pop-up motorcycle camper that I could pull with Ray’s VW bug and keep stocked for camping. Because it’s not the camping that’s hard – it’s the three days of packing and three days of unpacking, laundry & recovery that’ll do you in.
Posted by mars at 10:35 AM No comments:

I teach college composition, literature, creative writing and honor’s English at a state university. But I was never one of those kids on a clear, determined trajectory along a carefully considered career path. I was more the aimless wanderer who happened on my career fairly late in the game. Along the way, I’ve had some weird jobs, for which I’m grateful, because I learned important life lessons from every one…
1. Car hop at A & W. This was my first job at 14. I learned two valuable lessons: (a) It’s not okay to throw 50 cents in small change back in someone’s car and yell, “You need this worse than I do!” (b) If a pimp in a lime green suit, all kinds of high, jumps the parking curb and drives THROUGH the plate-glass storefront up to the counter, then leans out his window and orders a chicken dinner, get him chicken dinner. Now.
2. Nursing Assistant. I did this twice, once at 15 and again at 24. Two things happened that fundamentally changed me as a human being. First, a sharp but frail old man not allowed to live on the same floor with his non-ambulatory wife, hunted me down in the hallway and slipped a quarter in my hand. He thanked me for being nice to his wife. A frustrated NA had told her God didn’t love her for being such a bother. I had found her crying, so I’d brushed her hair and sat with her a bit. Nothing noble – just simple human decency – for which her husband felt he had to PAY. Second, a youngish man with cerebral palsy – Cletus Stalnaker – motioned with his head one day toward his dresser. Through a series of my questions and his nods, he directed me to a notebook in a drawer he wanted me to read. I sat in a chair beside his bed and cried as I read a notebook full of poetry he’d typed with his head, using an electric typewriter and a stylus attached to a headband. 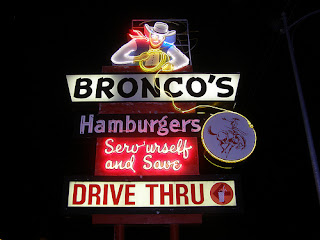 3. Janitor. I cleaned dental offices at night. I learned I’d rather use old railroad spikes for toothpicks than EVER go to the dentist again.
4. Food service truck driver. I was 17. I had to wear an adorable little outfit (very French maid, though I didn’t realize that at the time), and drive a deli truck to industrial/factory sites, park, open up a side window, and serve food for coffee & lunch breaks. I felt like a lamb cornered by rabid wolves and lasted only a week. Plusses: I got to cruise Omaha driving a big-ass truck, and, as a redhead, I loved that the company was called Red Top Food Service.
5. Bronco’s Drive-In. I was 15. I learned you can eat a lot of fries in the time it takes you to save up for an Ovation guitar. Too many fries, really. Plus: My name was Prescher then, and my boss, Johnny, called me “Precious.” Cool. 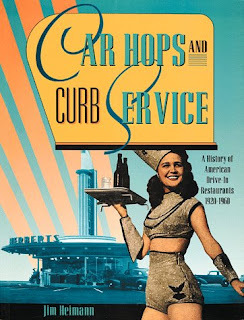 6. Maximum Security bank teller. I worked for First National Bank, in the basement vault. I learned that a smart, skilled young woman may be forced to train a dull ex-UNL football player with only rudimentary head-butting skills, who will then move upstairs into a management position and make at least five times the money paid to the smart young woman who trained him. This was an invaluable lesson that I would re-learn again and again, in one way or another, in almost every job I’ve had since.
7. Taco Bell. I worked there one hour. I went in for my first day, put on my uniform, watched the boss spoon grease over and over the taco meat for 20 minutes while he talked, said I had to get something out of my car, and drove off in my uniform.
8. Drive-up bank teller. I learned that if your female co-worker wears pleated miniskirts and exaggerates her movements as she stretches up to reach the capsule in the vacuum tube, your male boss will give her a raise. I also learned that if you, in your smart & sensible pantsuits, threaten to quit if he doesn’t also give you a raise, you’d better be prepared to quit.
9. Residential Care Assistant. I learned about the incredible power of drugs. The organization I worked for provided care for folks with mental (and often physical) disabilities in neighborhood group homes. I took care of one woman who swore, screamed, stuck her finger in her eye, and constantly stripped and crawled around the house naked. After a year or so, the organization hired a new oversight physician, who reviewed & changed her meds. The last time I saw the woman I had cared for, she was calm, fully clothed, and clearing the dinner table. 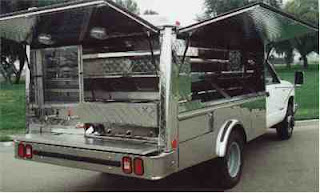 10. Cocktail waitress in a hotel bar. I learned that RAF pilots who drop room keys on your tray have NOT mistakenly given you a key instead of a tip, you poor naïve girl. The key IS your tip. Drop the key in the hotel pool.
11. Ad agency copywriter. I learned that (a) Less. Really. Is. More. (b) Grammar is subjective when it comes to advertising. (c) There are only so many ways one can say “We care” before one comes around to, “We could care less,” and (d) ad agency people, unlike many academics, have senses of humor.
All of these experiences have made me a more patient, compassionate, light-hearted and sometimes cautious teacher. And above all, they remind me that what my students learn outside the classroom will ultimately be waaaay more important than my third (or thirteenth) lesson on the evils, of, comma, splices.
Posted by mars at 7:03 AM No comments: