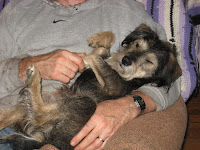 I’ve recently been diagnosed with an anomalous gene mutation – the HHN-i (Human Hyper-Nurturer-insoluble) gene. It appears to be a dominant mutation passed along familial female lines, causing an overdeveloped nurturing instinct. Carriers typically take in strays (animal and human), cook in stadium-sized quantities, cut other peoples’ food into bite-sized morsels, and tell other adults what not to wear in public. Another effect of the mutation is an invisible aura emanating from carriers – a sort of magnetic beacon – that sucks in like a wormhole any passing life form the carrier thinks would benefit from tuna casserole and a fluffed pillow. The diagnosis came as no surprise to us here at Uncannery Row Convalescent Care Facility & Home for Wayward Creatures – the evidence is everywhere.

For example, we just picked up Rickie Lee, a 7 or 8-year-old spayed, declawed cat we “inherited” from our son, from the vet. She had a $300 tumor removed from her leg. While we wait for lab results to decide on our next move, she sulks around the house in her brand new Elizabethan collar, and I try to follow an impressive list of post-operative instructions that include “no jumping or stair climbing” (she’s a CAT…they knew that, right?). 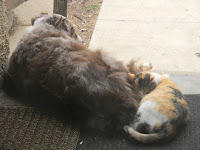 In the onion-domed dog house just outside our back door, Kitty Wells, a tiny stray calico cat someone dumped at the Row a few weeks back, tends to four 2-week-old kittens while we tend to her – organic cat food, goat’s milk, and flannel sheets to line her kitten box. I spent yesterday making a nice new box the kittens couldn’t crawl out of, and drawing up an extensive application for those brave enough to offer a home for one of the kittens – 2 orange tabbies, a grey calico, and a black “skunk” kitty with white nose & paws. Home inspections are mandatory. 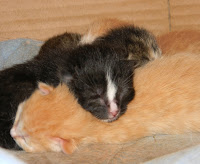 Our 10-year-old Australian Shepherd, Jada (a Humane Society rescue), is now on a daily aspirin & glucosamine regimen, and our 3-year-old Schnoodle, Yogi (the dog version of Denise-the-Menace), has been bringing baby bunnies back from the pasture – lovely little offerings on the back porch, which I mourn and Kitty Wells steals.

I’ve also been baking parrot bread – organic corn meal, chopped nuts, vegetable puree and organic eggs – which I cut into little squares and freeze in weekly portions. Triggered by the longer spring days, our rescued Lilac Crown Amazon parrot, Polly Hester (she’s between 15-20), does daily rainforest calls at mind-numbing volume. Meanwhile, about the time Kitty showed up, Stella Faye, our 13-year-old African grey parrot, began incessantly calling “Sophie!” followed by the whistle we use to call the dogs. Sophie, a cat we had when Stella was a baby, has been gone for 10 years or more. Spooky. 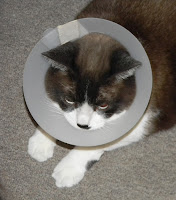 Then there are the peacocks, of course. We’re heading into nesting season with 16 adults. Our 6 adult males have been doing their loudest “HELP! HELP!” mating calls for weeks now, starting just after dawn, bless their hearts. Four hens have already gone to nest out in the tall pasture grass, and a couple younger hens are eyeing the window wells, so I need to get out there with screen. The nesting hens do a “fly in” each evening to snub the boys and to check out the buffet, which I keep stocked with corn, black oil sunflower, and a little Wal-Mart cat food for nesting calcium & protein. 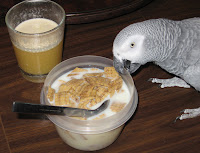 Our newest victim of my HHN-i beacon is Jeremiah the invisible frog, who’s bad sense of direction led him to tunnel through the dirt and come up not out by the frog pond, but under our greenhouse boardwalk. We’ve never seen him, but his intermittent soft croaking adds to the crazy Row symphony.
There’s no shutting down the HHN-i gene (in her 70’s, my mom is STILL taking in foundlings). So the best I can do is hide inside, hoping our metal roof temporarily blocks the beacon, while Ray calculates the lumber we’ll need to build a corn crib and add on a cat wing…
Posted by mars at 12:55 PM